Park Güell was intended to be an estate for well-off families. When Eusebi Güell bought the site located on a hill with little vegetation and few trees called Muntanya Pelada (Bare Mountain) in the 1900s, he wanted to recreate the selective British residential estates and entrusted the development and urban-planning of the entire estate to Antoni Gaudí. The location was unbeatable with a splendid view over the sea and plain of Barcelona. The estate made provision for 60 triangular plots with a complex network of paths, viaducts and steps to cope with the steep topography of the terrain. Gaudí was doing a fantastic job providing practical solutions for would-be residents while aspiring to achieve a total work of art. However, by 1914, Güell chose to halt construction work on the project because no one was buying. Although much has been done on the land and the estate is like no other, the conditions of plot acquisition, the exclusive nature of the estate and the lack of proper transport to the estate made the project a commercial flop. Eusebi Güell’s heirs offered the estate to the Barcelona City Council which decided to acquire it in 1922 and opened it as a public park four years later. Boohoo for Eusebi Güell but yay for us because we get to see more of Gaudí’s work!

To get to Park Güell, you can either ride the public bus or the metro. Sandy and I took the metro because we wanted to save time. We took the green line or L3 and got off at the Lessep stop. It was easy finding Park Güell upon exiting the metro. We just followed the street signs and everyone else before us. LOL!

Expect a good 15 minute walk to Park Güell. On the way, I found this tempting ad by one of the shops in the area. How cute!

We’re finally entering Park Güell. If you used the Metro like us, you’ll be starting from the top of the hill going down so you still have a pretty long walk ahead of you before you get to the main entrance where the tickets are sold. I didn’t know this though because when I first visited the place back in 2007, admission was free. Now, tickets cost 8 Euros for adults (7 Euros if you buy online) and you’re only allowed to enter on your assigned time slot. Once you’re in though, there’s no time limit. You’re free to roam around for hours and hours.

From this point, you can already see the monumental zone of the park, the area that requires the entrance ticket. Do you see the path lined with coconut trees ahead? That’s still part of the free zone where tourists can roam around while they wait for their time slot.

As I’ve mentioned, the park is situated on a hill with a beautiful view of Barcelona. You can even see Gaudí’s La Sagrada Familia and the bullet shaped building called the Torre Agbar (which will soon become the Grand Hyatt Hotel) from here.

This is the house of Gaudi located outside the monumental zone. He moved into the estate in 1906 and lived here with his family until 1926. Now, it’s the Gaudi House Museum or Casa Museu Gaudí where several of Gaudí’s original works are displayed. There is a separate entrance fee for this.

We’re finally at the monumental zone! The iron gate that you see here is the main entrance to the park found along Carrer D’Olot. It was brought from Casa Vicens, an early work by Gaudí. To either side of the gate are the two pavilions that formed the porter’s lodge of the old estate. Both have unique roofs, clad with trencadís–a decorative system much loved by Gaudí where one makes use of small pieces of broken tiles to cover surfaces. The one on the left is the Casa Del Guarda, built between 1901 and 1903. It’s one of the few examples of modest dwellings created by Gaudí. Now, it’s part of Bareclona History Museum.

The one of the right with the cross is also a porter’s lodge. It was intended to be a place to receive visitors of the estate, with a spacious waiting area. Now, it serves as the park’s souvenir shop. Don’t both structures look like gingerbread houses? Or am I just hungry?

Here’s a closer look at the roof clad with trencadís. Isn’t it something else? I wish I had Polly Pocket houses like this! LOL.

Across the porter’s lodge and iron gates is the famous flight of steps. This is the exact area where I shot my Mango It Girl photo!  It’s the first thing you’ll see coming from the main entrance. The steps start from the entrance square and ascends to the Hypostyle Room. 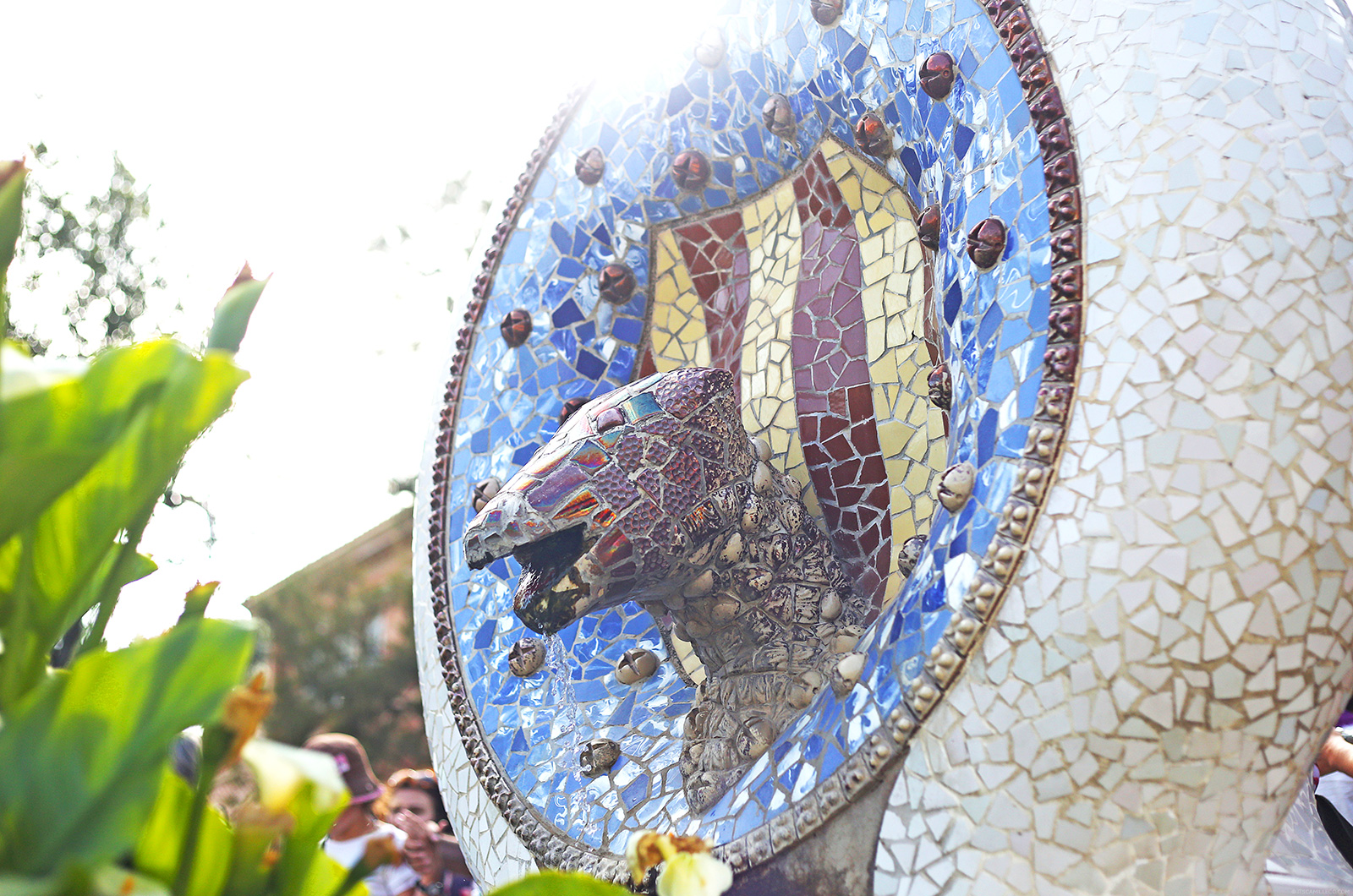 The flight of steps has so many details you shouldn’t miss like this fountain in the form of a snake’s head above the shield of Catalonia. As you can see, it’s covered in tiles, like most of the park’s details. This technique of adhering layers of tiles is a traditional technique of construction called Catalan vault used by Gaudí and other Catalan architects within the modernisme movement.

Above the snake head fountain is a brightly coloured salamander called “el drac” (the dragon). Behind it is a tripod that appears to be formed by 3 snakes (the part with the purple tiles). Do you see the floral tiles behind the snakes? Under that is a circular bench that offers a fine view of the entire entrance. Tourists can sit and rest there for a few minutes while taking in the picturesque surroundings.

The porter’s lodge really looks like a gingerbread house right? I’d like to believe Gaudi is a little whimsical. He always makes use of odd shapes and curves. Never boring.

If I’m not mistaken, this is the portico of the washerwoman, found at the gardens of the former farmhouse, Casa Larrard. The portico is made from unpolished stone. Its exterior is a series of buttresses, one of which depicts a rough caryatid known as the Washerwoman. Too bad I wasn’t able to take a photo of the Washerwoman! I was too excited to take ANTM-inspired photos!

You can clearly see how Gaudí was inspired by nature, much like his La Sagrada Familia. It looks as if I’m trapped inside a tree.

This is the Hypostyle Room or the Sala Hipóstila, a covered area with 86 striated columns in the Doric style. It was intended to be a market for the estate among other uses. The photo before this shows how it’s exterior looks like, lined with gargoyles and its edges sloping in a curvilinear fashion. The contrast between the two is really interesting–classic columns versus the unique edges.

This is how the ceiling inside the Hypostyle room looks like. It’s amazing how Gaudí thinks of all these little details!

Here’s a wider view of the curved edges I was talking about. On top lies the main terrace surrounded by the Banc de Trencadís, a tiled bench curved all over its perimeter to the form of a sea serpent. It’s one of the main attractions of the park because the view from here is amazing!

Take a closer look at these colorful-tiled mosaics.

The view for the main terrace consists of not only the park but the rest of Barcelona as well. Imagine if people actually lived here! What a view to wake up to everyday.

The main terrace actually serves a greater purpose than just relaxation and recreation. According to Lonely Planet, “this giant platform was designed as a kind of catchment area for rainwater washing down the hillside. The water is filtered through a layer of stone and sand, and it drains down through the columns (I’m presuming these are the columns at the Hypostyle room) to an underground cistern.” You’d think that if you see a place like, everything was just created for aesthetic purposes but no, Gaudí is a true genius!

I’ve always been a fan of Gaudí. Ive visited his other works–La Sagrada Familia, Casa Batlló and La Pedrera, and each time I got blown away. I mean this wasn’t even my first time in Park Güell and look at me, I’m still exploring the place with my mouth half open in awe. If you ever go to Barcelona, make sure to visit at least one of his creations. I promise you it’ll be a great experience! One you won’t forget.